Green Free Library’s service area, which includes the townships surrounding Wellsboro, encompasses 11,900 residents. The library is part of the Potter-Tioga Library System (PTLS). Of the eleven libraries in PTLS, Green Free is the largest, surpassing any of the other ten in number of items in its collection and population served.

The library holds over 64,000 items including fiction, nonfiction, reference, large print, young adult, and children’s books. The library has collections of audio books, MP3 CDs, Playaways. Music CDs, DVDs, as well as extensive print collections. The library subscribes to over 50 periodicals and newspapers and has access to many databases and e-collections.

The Board of Directors meets the second Monday of every month at 7:00 PM. There are no meetings during July, August, and December. The annual meeting is held on the third Monday in June at 7:00 PM prior to our normal board meeting.

Green Free Library cards are free and available to residents of Pennsylvania. A valid PA Driver’s license or civilian’s ID is required. A parent or guardian must sign, in person, for the application of a child under eighteen. The library honors Access PA cards, available for PA residents across the State.  And, out-of-state adult residents, with photo ID, may obtain a temporary card for a fee of $25, refundable by mail, when the card is returned.

1855  –  Chester Robinson, a native of Otsego County, New York, constructs his home at 134 Main Street, Wellsboro. Robinson, with his brothers, has built a fortune through the lumber industry and later founds the First National Bank. The home has a square shape and is painted white with a white picket fence.

1890  –  Chester Robinson dies and the family home becomes the property of his daughter, Mary B. Robinson. After some years abroad, Miss Robinson hires architect William Henry Miller of Ithaca, New York, to remodel the house. 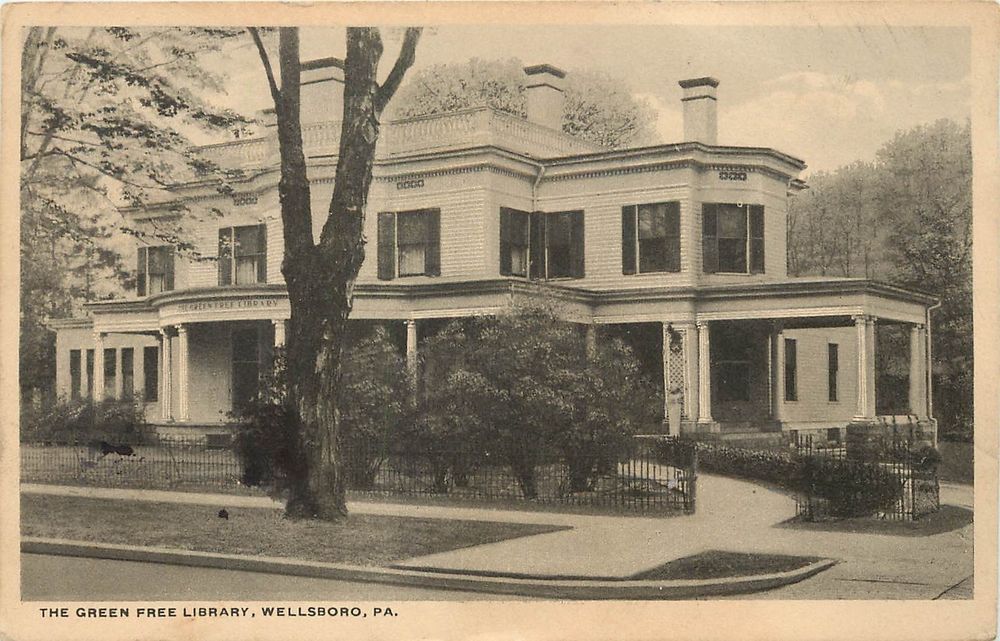 1898  –  Remodeling is completed and the house is named “Chester Place.” The square shape of the old home serves as a nucleus for the new estate, which includes east and west wings, plus a formal garden to the rear. A curve is added to the front of the house to accommodate a big fireplace and chimney in the large living room, which today houses the library’s juvenile and young adult collections. The young girl’s portrait in this room is of Mary B. Robinson, or “Miss Mazie,” as she is called. The west wing is Miss Robinson’s former library. The fireplace is made from Italian marble. Today, this room contains children’s materials. Also in the west wing is a sunroom, which houses a train set, LEGO table, easy readers, and other materials for children. The east wing consists of a porte-cochere and the dining room. This dining room, with its Tiffany window (installed in 1903), has become the library’s Pennsylvania Room.  Many patrons use this room for genealogy research and other reference work.

1903   – The Tiffany window is installed in the dining room to depict the gardens behind the home.

1911  –  Charles S. Green of Roaring Branch, a wealthy lumberman, bequeaths $50,000 for the incorporation of a Green Free Library in Wellsboro.

1913  –  Mary B. Robinson dies and leaves Chester Place to her childhood nanny and life-long companion, Miss Elizabeth Walbridge. Upon her death, it is granted to Miss Robinson’s nephew, Chester Converse. Upon his death, it is to be given to the Trustees of the Green Free Library. Miss Robinson served as president of the trustees at the time of her death.

1915  –  The Green Free Library operates at its temporary quarters in a vacant storefront at 97 Main Street, Wellsboro.

1916  –  Chester Converse deeds his life interest in the former Robinson house to the Green Free Library.

1917  –  Chester Place is remodeled and opens as the Green Free Library.  State Librarian, Thomas L. Montgomery, is the guest speaker at the opening.

1963   – A wing is added to the northwest side of the library, which today is the main room, holding the reading area, adult fiction, nonfiction, audio books, the periodical and reference collections, and computers for public use.

1969  – The Gmeiner Art & Cultural Center is constructed on the library grounds.

1987  –  A grandfather clock is donated to the library and put on display in the Pennsylvania Room, courtesy of William Crompton, grandson of former Pennsylvania governor William A. Stone, 1899-1903.  Stone was born in Wellsboro, served in the Civil War, attended Mansfield State Normal School, and was a district attorney in Tioga County before serving in the US House of Representatives and becoming the 22nd governor.

1991  –   The juvenile and children’s rooms, plus the foyer, are repainted and carpeted. The red patterned carpet of the entranceway reflects the Oriental rugs used when Miss Robinson was in residence.  A computerized circulation system is first used at the library.

1994  –  The Green Free Library becomes handicapped-accessible with the addition of a ramp at the rear of the building.

1997  –  Through 1998, a Capital Campaign successfully raises funds for continued improvements to Chester Place and the Green Free Library.  Internet access is made available for patrons.

1998  –  New landscaping of the lot is completed, including a garden-type area with fountains and benches at the western side of the building. In addition, the front porch is replaced, columns repaired, and the exterior repainted.

2005  –  Synchronizing with the 150th anniversary of the house, the Friends of the Green Free Library has photograph of Miss Mazie restored and framed.  Portrait is now hanging across from the circulation desk.

2008  –  Front room that houses the juvenile and young adult collections is renamed the Robinson Room in honor of Miss Mazie.

2015  –  Front porch is fully restored when untreated wood and crumbling foundation are found during refurbishing.  New decking, foundation, and supports are added, as well as restoration of one damaged pillar.

2016  –  New landscaping is completed in front of building.  A roof is added to the back ramp. And, the drive and parking area is resurfaced.

2017  –  During the year, the outside of the building is painted and a new gutter is installed on the front of the building. New roofing is to be done in 2018.

2017  –  In honor of the 100th Anniversary, the millstone, found in the Wellsboro area and part of the original library garden, is moved to the front flower garden.

2017  –  On August 13, 2017, a Centennial Celebration is held as the culmination for the 100th anniversary year.  Speeches, cake, music, and library tours are featured throughout the day.  Guest speakers include Glenn Miller, Deputy Secretary and Commissioners of Libraries, and Christie Buker, Pennsylvania Library Association Executive Director.  Attendees include the Green Free Library Board of Directors, the Tioga County Commissioners, librarians from the North Central Library District and Potter Tioga Library System, as well as many present and past patrons.

2018  – The Board of Directors, Leslie A. Wishard, Library Director, and staff prepare for the next 100 years of providing library service for Wellsboro residents and the citizens of Tioga County. 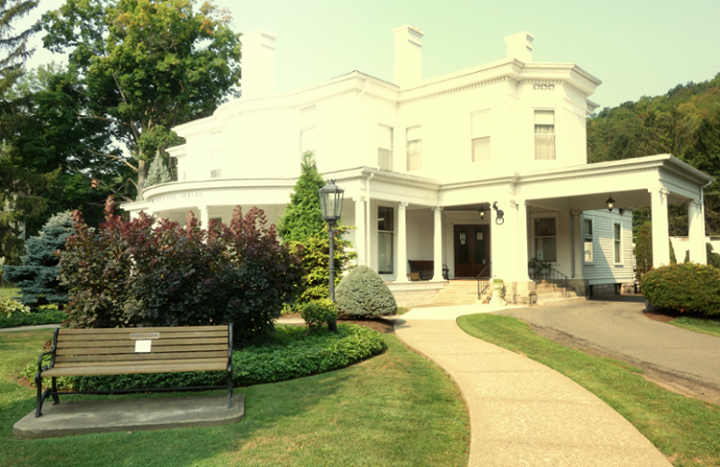